As you know, we’re releasing a new podcast.

It’s a sketch show called Tim and Simon: The Sketch Show. We spent a while coming up with that one…

This is something we want to take time over, like building a plane, you want it to take a while. Otherwise it’ll end in disaster, lawsuits, grieving families and certainly won’t be funny.

It’s fully scripted and we want this to be good, so we’re writing and re-writing sketches and producing the damn thing as well as we can. We won’t be releasing it until we’re 84% happy with it.

So with that in mind, we’ll be bringing you updates on how we’re getting on and maybe a sneaky peak behind scenes as to what we’re up to… Starting now.

Using the X-Factor process as a template, we’re happy to announce that the audition stage is over and we’ll now be taking taking the successful sketches through to bootcamp. Basically, we have a big pile of sketches and we’re picking our favourites.

Once we’ve done that, we’ll sort out rough episode structures and then edit the sketches until we’re ready to go on to the judges’ houses.

You’ll be awestruck by the theme music to Tim and Simon: The Sketch Show – made for us by our good friend Stephen Davey.

We have the music, now all we need is the sketches!

We’re happy with what we have so far, it’s a good mixture of daft and subtle. There’s some ridiculous stuff about talking whales and Teletubbies but also some very grounded and gritty stuff like… Maybe not, but there’s definitely variety!

We are aiming for a frenetic, daft and well produced show that we hope you’ll enjoy*.

You’ll find out more as we progress – you’ll be kept in the loop.

*If you don’t, remember that we know where you live 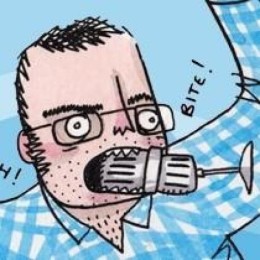